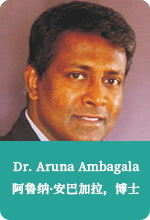 Dr. Aruna Ambagala is the Head of the Mammalian Diseases Unit and the OIE Reference Laboratory for Classical Swine fever at the Canadian Food Inspection Agency-National Centre for Foreign Animal Disease (CFIA-NCFAD), Canada. He is the OIE designated classical swine fever expert at the Laboratory, and an adjunct professor at the Faculty of Veterinary Medicine-University of Calgary, Canada.

Dr. Ambagala received  his Bachelor of Veterinary Medicine and Animal Science degree from the Faculty of Veterinary Medicine and Animal Science, University of Peradeniya, Sri Lanka in 1998, and he obtained his PhD in Veterinary Virology from the University of Nebraska-Lincoln, USA, in 2004. Dr. Ambagala completed his first postdoctoral training at the National Institute of Allergy and Infectious Diseases at the National Institutes of Health (NIH), Bethesda, Maryland, USA in 2007, and his second postdoctoral training at the University of Toronto, Canada in 2010. He joined the Canadian Food Inspection Agency-Lethbridge Laboratory in Lethbridge, Alberta in August 2010 as a Research Scientist. In 2015, he moved to National Centre for Foreign Animal Disease (CFIA-NCFAD), as the Section Head of the Mammalian Diseases Unit. In addition to overseeing regular diagnostics at the Mammalian Diseases Unit, Dr. Ambagala conducts a number of research projects on transboundary and emerging viral diseases including African and classical swine fevers, bluetongue, rabbit hemorrhagic disease at the NCFAD and leads several international projects in Africa, Asia and Central America on African and classical swine fevers.