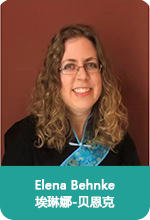 Dr. Elena Behnke earned a Doctor of Veterinary Medicine from the University of Illinois at Urbana Champaign and completed a Master’s in Avian Health and Medicine from the University of Melbourne, Australia. A diplomate of the American College of Poultry Veterinarians, she is beginning her 15th year working as a poultry veterinarian in the USA. She worked for several years in the Southeastern United States as a poultry laboratory clinician and diagnostician, and later she spent time as a poultry technical services veterinarian, supporting 25 States in the Eastern USA on poultry coccidiosis and gut health programs. She also served for a few years as a primary breeder veterinarian for both egg-type and meat type chicken companies in the poultry industry, working to ensure the health and welfare of pedigree breeding stock in the USA. During her years with the National Poultry Improvement Plan, she served first in the role of Veterinary Laboratory Coordinator, overseeing NPIP’s network of 100 authorized laboratories and later as Veterinary Compartmentalization Coordinator for the poultry primary breeder Avian Influenza Clean compartmentalization program, before stepping into her current position as the Senior Coordinator of the National Poultry Improvement Plan. In her present role as Senior Coordinator she serves as Executive Secretary to the General Conference Committee of the NPIP, which is an official advisory committee to the USDA’s Secretary of Agriculture on matters pertaining to poultry health.

Dr. Behnke resides near Atlanta, GA, with her witty husband of 16 years, her beautiful 4-year-old daughter who was adopted from Guangdong, China, her two spunky Italian greyhounds, and one feisty calico cat. In her spare time, she enjoys traveling to national parks, crocheting, attempting to learn Mandarin, and spending time with family and friends.