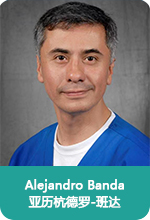 A native from Mexico City, Dr. Banda is a clinical professor in veterinary virology with the Department of Pathobiology and Population Medicine, College of Veterinary Medicine, Mississippi State University.  He is the section leader of the poultry and mammalian virology laboratories, and the vivarium area at the Mississippi Veterinary Research and Diagnostic Lab. He obtained his Doctor of Veterinary Medicine, and Master in Veterinary Science degrees from the National Autonomous University of Mexico (UNAM). In 2002, he obtained a Ph.D. in medical microbiology (virology) at the University of Georgia.  From 1991 to 1992, he was a Consultant in Animal Health with the Inter-American Institute for Cooperation on Agriculture (IICA), Office in Mexico, overseeing diagnostic services in rabies and avian virology at the National Center of Animal Health Services (CENASA) in Mexico. From 1995 to 2004 he served as an associate professor in avian medicine and virology at the College of Veterinary Medicine at the UNAM, and from 2004 to 2008 he served as an extension associate and laboratory director at the Cornell University Duck Research Laboratory in Eastport, NY. Dr. Banda has authored or co-authored 20 articles in peer-reviewed journals that are related to the development and application of molecular techniques for the detection and typing of important viruses in modern poultry.  He has served as a speaker in numerous scientific and professional meetings in the United States and abroad. He is a diplomate of both the American College of Poultry Veterinarians (ACPV), and the American College of Veterinary Microbiologists (ACVM).  Dr. Banda has served as an Ad Hoc reviewer for several scientific journals related to diseases of poultry, and he is member of the editorial board of the journal Avian Diseases, since 2008.  Dr. Banda has his residency in Brandon, MS.