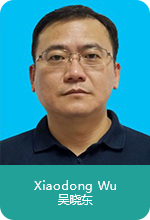 Wu Xiaodong, Ph.D., researcher, director of the National Research Center for Exotic Animal Diseases under the China Center for Animal Health and Epidemiology. Has been committed to the research of comprehensive prevention and control technology for African swine fever, petit ruminant disease, bovine nodular skin disease, mad cow disease, African horse fever and other major exotic animal diseases, and has hosted and participated in the 12th and 13th Five-Year Plan. National scientific research projects have won many provincial and ministerial science and technology awards. The diagnostic reagents developed by the organization such as African swine fever and Peste des petits ruminants have been widely used, and they have played an important role in the effective diagnosis and monitoring of various localities and effective control of the epidemic. Since the first case of African swine fever in China broke out in Shenyang, Liaoning in August 2018, he led the team to complete the diagnosis and review of suspected epidemics in the first time, comprehensively promote the development of diagnostic reagents and new vaccines, and provide powerful technology for the prevention and control of African swine fever support.